Balitraveldiary.com – The Ngenteg Linggih ceremony is a ceremonial procession carried out by Hindus to lift (sit) the essence of God in its manifestation in a newly established holy place. Either a family or a group of community members is established in mutual cooperation. Ngenteg Linggih consists of the root word “nteg” which means calm and “” linggih “which means sitting. It literally means sitting in tranquility. Here are some things you should know about this ceremony:

The literal meaning of sitting in serenity is addressed to Ida Sang Hyang widhi Wasa in all forms of manifestation of Ista Dewata which are distilled or altered in that holy place. The manifestation in question is to whom the temple is addressed. Therefore, the process of Ngenteg Linggih explains to the general public that the Hindu concept of worshiping a statue or an idol is a misconception. Even though the real concept is that the Hindu community worships Sang Hyang Widhi, who is distributed in that place.

Talking about the manifestation, what is meant by the manifestation of Ida Bhatara is to whom the palinggih or temple is addressed. For example, to raise family skills or refutation for ancestors (Hindu term), the distanakan there are family ancestors. Meanwhile, if the temple is founded by a group of people, it is necessary to discuss it first to agree on who will be distended. The point is that it is in accordance with the Ista Dewata that is desired in the sacred building.

Another matter that needs to be agreed upon before carrying out the Ngenteg Linggih ceremony is choosing a good day or padewasan. In Hindu culture it is very crucial to determine this. There are two main factors for doing padewasan, namely sasih and pakuwon. Sasih that are considered good for carrying out these Ngenteg Linggih events are Kasah, Katiga, Kapat, Kalima, and Kadasa sasih. Meanwhile, the love that is considered the worst is Jyesta Asada in the Balinese calendar. The good day that is determined to carry out the Ngenteg Linggih ceremony will later be the day for the next piodalan to be carried out at the temple.

The Ngenteg Linggih ceremony is carried out with a series of ceremonies. Either done for one day or seven days. This is done according to the ability to carry out the ceremony. The first thing that Hindus have to do before establishing a holy place is to convey the intention of the people to Ida Bhatara who will be distilled (distanakan) in the Ngenteg Linggih procession or commonly known as the Nuwasen ceremony.

Furthermore, there is the Maguru Piduka ceremony which aims so that the Bhatara who will be distilled are not surprised by the series of ceremonies that will be carried out. The Nancep Tetaring ceremony and its accessories are the next process. Then proceed with the Piodalan Mases Elders ceremony. At this ceremony, Hindus offer sacrificial animals. The next series of ceremonies is the Tawur which is then immediately continued with the Melaspas, Mapedagingan, and Ngelinggihan ceremonies. All the long series of ceremonies ended with Nyegara Gunung

All of these ceremonies end with Nyegara Gunung. In certain villages there is a continuation after Nyegara Gunung. The ceremony is the Nyepiang Karya ceremony, all residents do brata penyepian to reflect on what has been done.

After the Ngenteg Linggih ceremony is over, there will be a ceremony that is routinely carried out for the sacred building (temple) such as the piodalan. There is even a ceremony held when the sacred building is 30 years old. The name of the ceremony is Mupuk Pedagingan which has the aim of cultivating or giving strength back to the temple. However, if the family or community is unable to perform the Mupuk Pedagingan ceremony after the temple is 30 years old, then the intention may be postponed by asking permission from Ida Bhatara.

In its implementation, the Ngenteg Linggih ceremony is very flexible based on the ability to build a holy place (temple). If those who build are less fortunate, then what is carried out is the essence of the ceremony. However, if the builder is sufficient or maybe a group of people according to the agreement, it can take up to seven or nine days with various kinds of sacrifices in the procession of the ceremony.

Whether the ceremony is performed simply or grandly, what is most important is the essence of the ceremony. In fact, it is actually “based on ability” that is meant not only about economics. However, there is a teaching that ceremonies in Hinduism do not have an element of coercion. That is, all implementation is carried out sincerely.

Some of the ceremonies that have recently looked grand and luxurious are in fact the mindset of the community itself. Not teachings from Hinduism. In fact, the most important of the Hindu teachings about ceremonies is that they are not burdensome in their implementation. So that it does not discourage the public from building sacred buildings for their spiritual interests. BaliCeremonyTradition
Piodalan Ceremony, Worship of the Gods as a Temple Commemoration BaliCeremonyTradition
Cleanse Babies at the Nelu Bulanin Ceremony in Bali BaliCeremonyNewsTravelTribe
Explore more the role of chickens for Balinese Hindus 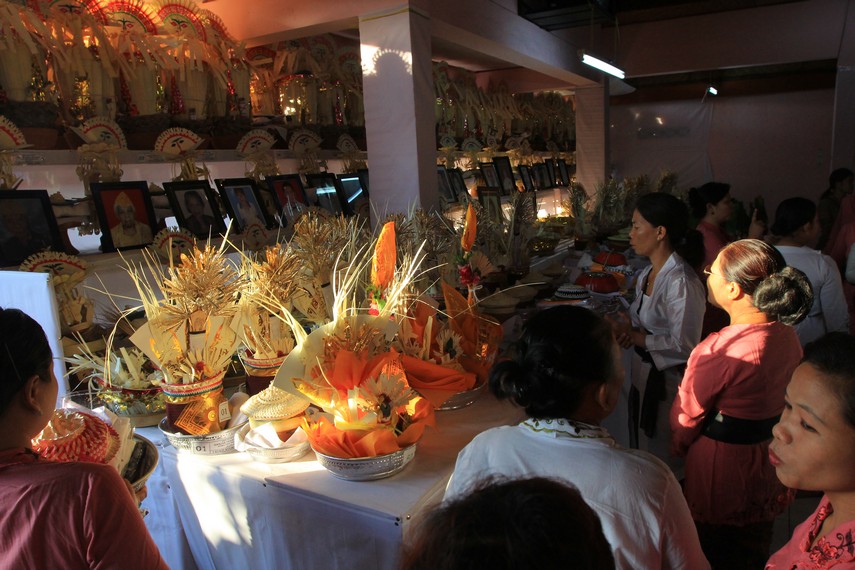 BaliCeremonyTradition
The uniqueness of Ngaben ceremony in Bali BaliCeremony
Melasti ceremony before the feast of Nyepi in Bali